David French at National Review says, "If you care at all about justice, you will find John Fund and Hans von Spakovsky’s well-written and thoroughly researched new book highly welcome. It functions like a klaxon, an alarm warning a slumbering public that the nation’s largest and most powerful legal organization is not just thoroughly politicized but effectively out of control." ("The Department of Social Justice", National Review​, August 11, 2014 issue)

Ed Feulner, a founder of the Heritage Foundation,  says about Obama's Enforcer, "It’s one thing to read about certain cases as they pop up in the news cycle — an article about a civil rights investigation here, a blog post about Operation Fast and Furious there. It’s another to assemble them in one place and get the big picture in one sitting."

J. Christian Adams says Obama's Enforcer "details the radical nest that the Justice Department has become. Their book echoes what I still hear from Justice Department employees across the Department still stuck working for a lawless radical attorney general: you simply cannot believe what is happening inside DOJ."

Judicial Watch says, "Fund and von Spakovsky detail how Holder acts as a 'heat shield' for the administration, protecting the president from a growing series of scandals, while transforming the Justice Department into a stronghold of left-wing activism."

Benjamin Weingarten at The Blaze says Obama's Enforcer is a "bombshell" and "vital reading."

​The Daily Signal has an excerpt of Obama's Enforcer.

Read a Q&A between Hans and Townhall.com:

Human Events Interviews Hans about Obama's Enforcer:
The Most Dangerous Man in the Obama Administration
July 2, 2014

Buy it on Barnes & Noble
Buy it on Amazon 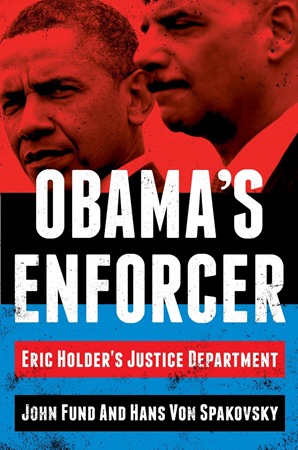 Interviews with Hans about ​Obama's Enforcer